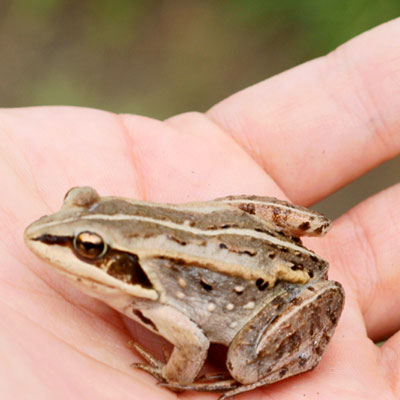 Lithobates Sylvaticus, usually known as the Wood frog, is a native of North America.  You can see them from the southern Appalachians to the boreal forest and Eastern North Carolina. These frogs have an amazing freeze tolerance ability and spend their maximum life on land. Their interesting habitat includes uplands, vernal pools and peat bogs. This species is considered as obligate breeders among ephemeral wetlands, which is also called  a vernal pool. This has attracted the interest of various researchers in recent years. Wood frogs can be frequently found in New York. Due to their high freeze tolerance ability, wood frogs  can completely solidify and then thaw out as temperature increases.

The length of the Sylvatica wood frog is between 3.5 cm and 7.6 cm. Wood frogs display various skin colors such as tan, rust, brown, and also  gray and green.

Their  upper lips have a  white lining. Their mid back and sides have a fold of yellow- brown color and the thighs of male frogs are usually brighter than that of females. Female wood frogs are generally bigger than male frogs. The throat of male frogs is provided with 2 vocal sacs, which is used to make calls. When they are kept as pets in aquariums, ensure that  the bottom of the  aquarium is kept moist. These frogs are found near water bodies or in woodlands. They grow to around 3 inches in length and can change their skin color from pink- brown via tan to deep brown. They have black robber’s mask which stretches from their outer ear (tympanum) to their front leg.

They have a pair of dorsolateral ridges, a pair of raised lines on their back. Their abdomen is white in color. Since, they spend their max time on land their feet are not completely webbed. You can easily identify male frogs from females by their enlarged thumbs. 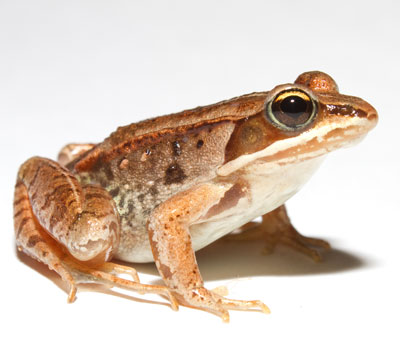 These species of frog are widely spread out in Canada and the United States. They are the exclusive species of frog that you find in the Arctic Circle.  They are the most common amphibian of North America. Specifically, this species of frog extend from Alaska to Labrador in Canada. These frogs are also easily found in North- East and Mid- East of the US and stretches from  North Dakota to Tennessee and northern Georgia.

As the name suggests, these frogs are more common across woodland areas. Their habitat consists of a range of places some of which includes  thickets, bogs, tundra, deciduous  and coniferous forests. This  species belongs to the category of  aquatic breeders, requiring fish less water bodies like woodland pools, water ditches or ponds to reproduce. While not breeding, these frogs hibernate under big rock, under fallen branches and logs. They migrate away from water bodies and hibernate by hiding  themselves under big leaves or logs to protect themselves from the cold winter months.

The Wood frog is not nocturnal and thus active at day time. Wood frogs perform cyclic migration and move to breeding pools either during the early spring or in the late winter. These frogs are generally solitary, though they assemble in a group. The little tadpoles of wood frog have the capability to identify their siblings. In fact, they had been documented to recognize their this ability. They were marked with ink and the released in their natural habitat. They group together in their family. This can be because of survival mechanism, that serve them with potential temperature control, food benefit and protection against predators.

During winters, these species of wood frogs go for their hibernation. They usually hibernate beneath rocks, leaf litter or stumps. They do not need deep dugs to hide. In case, if they get frozen, they defrost out again.

Wood frogs go through a process of very active breeding  during early spring or in belated winter, or in the early stages of spring during the initial summer rainfall. In their volatile breeding,  numerous frogs from different locations gather together at the pond side and they call to find mates. The larger the number of frogs, the greater is the chance for each single frog to find the perfect mating partner. Wood frogs  proceed to breeding after completing their hibernation. Each wood frog comes back to a similar breeding pond after every year and repeats its presence at the same pond for eternity. This species of frogs mate each year between March and May especially in the spring. At this time, the male frogs make different voice to draw females towards themselves. They even make quacking sound like ducks and mimic many different voices. After the mates are selected and mating happens, the females may lay heavy spherical eggs in the water, especially in the deep water. The diameter of each egg mass can be between 10 cm to 13 cm, each consisting  of 1000 to 3000 eggs. These eggs are either attached to the vegetation in the water or float over the water. After a week, these eggs change shape and begin to flatten. The flat surface of eggs allows them to float on the water surface. The jelly covering the eggs turn green, offering a kind of camouflage.  The eggs,  then appear as a floating bunch  of pond scum. The green color of jelly around the egg is due to the presence of several small  green algae.  Tadpoles evolve from eggs after 9 days to  a month  and undergo metamorphosis after completing their 2 months. A male wood frog is ready to breed after they are one year or two years old while female wood frog takes a little longer. A female wood frog becomes mature to breed when they cross 2 years or 3 years of their age. 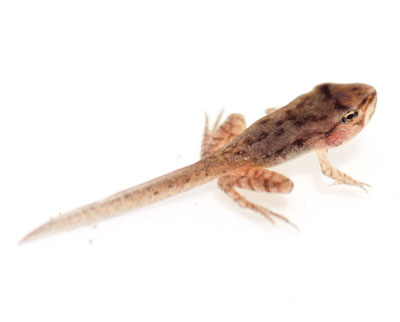 The Wood frog requires a  spacious cage to move and leap, though they do not go away from their adobe, they  still need a pretty bit of space for their movements.

So, minimum a 20 gallon cage is required for free movement of two frogs. If you want to increase the number, then increase the cage capacity as well.

This species of wood frogs  need an additional UVB light in the daytime.

In their natural habitat, wood frog subsist on peat moss or soil. So these two substrates will go well with them in  captivity. In fact,  you can also try bark chips.

Since these frogs belongs to cold habitat area,  the temperature in their cage during daytime should be around 75 F while at night, the  temperature should be between 65 degrees to 70 F.

One cricket each day will be very beneficial to their health. They in fact enjoy crickets meals, but their diet should include chopped earthworm, small slugs, meal worms and spiders.

Wood frogs generally love to eat beetles, meal worms, crickets and caterpillars. But try to feed them with 1 or 2 pieces until you have a hang of their diet routine. If you find that they quickly eat their food, then add some more insects, but if you see that, even after 15 minutes,  the food is still left, then it means you have served them more, try to cut down the quantity next time. Make sure that you change the water in their dish every day. Because, they spend their maximum time on land so this the only water that they drink. So to keep them healthy and active.

A mature wood frog will usually feed on various small invertebrates and terrestrial insects. The larvae of wood frogs  rely on algae, rotten animals,  plants, larvae and eggs of other amphibians.

They usually consume arthropods that are not insects.
Animal Foods

Wood Frogs drink the water that you provide for them in their dish, which means that they generally drink only clean water. While filling water in their dish,  make sure that you keep the water level low, so that the level of water does not bother them in getting out of it.

Unlike the other frog species, Rana Sylvatica can survive in extreme cold climate. The Journal of Experimental Biology once  printed that these wood frogs show exciting features during cold environment. They freeze and still live alive. This amazing characteristic makes them inhabit  chilly areas as well. Therefore, Rana Sylvatica or the wood frog stretches  from Georgia,  via Canada and into the cold Arctic Circle.

There are various creatures that can tolerate freezing up to some extent some of them includes insects, marine life and few reptiles. But, only some can carry out tricks similar to Rana sylvatica species of wood frog. The small amphibians possess  the capability to survive in the freezing water. They can submerge their two- third body in the water and live through it. This is all because of their Antifreeze blood. This kind of blood allows them to survive in the freezing water and stay alive. In fact,  the most incredible fact is that these species of frog can stay alive without breathing for a week. Even though, their heart stop beating, these frogs remain alive. Therefore, during chill winter hibernation, their physical process that includes metabolic activities, waste production and many more generally comes to a stop. These frogs are likely to suffer from multiple freeze and defrosting episodes during the entire winter.